03/29/07Â Â Â Â Â Â  FranÃ§ois Perrier â€“ steadycam operator on Outlander â€“ recently updated his website, as outlander finished shooting in January.Â  We previously reported on FranÃ§ois and his site and how he had previously worked with Director of Photography Pierre Gill on films such as The Covenant.Â  FranÃ§ois also included in his latest update a few pictures and descriptions of his work.Â Â  Here, he explains the pictures:

Â Â Â Â Â Â Â Â  I always want to do my own version of the labyrinth sequence of The Shining and got my wish come true in one made out of animals skins on Outlander. That night I was on my own with the actors having a great freedom of move.

The first photo is really neat and gives you a sense of the scale and action of Outlander.Â  Weâ€™ve added Ross Sangster to the crew page along with half a dozen other new entries since our last update. 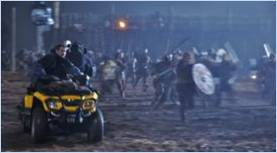 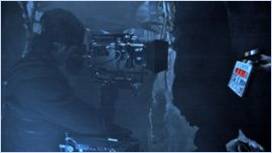 03/28/07Â Â Â Â Â Â  Weâ€™ve finally caught up on adding a number of pictures weâ€™ve been meaning to add to various galleries.Â  As well, Warren sent us along another batch of photos from the Newfoundland shoot, so our thanks goes out to him for those.Â Â  You can find the new pictures in the Newfoundland extras and on set Galleries as well as the Nova Scotia extras gallery. 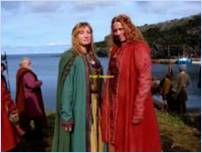 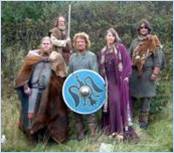 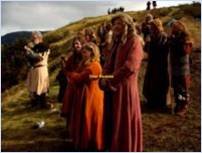 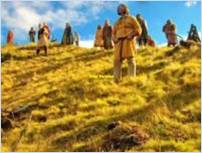 03/23/07Â Â Â Â Â Â  First up, weâ€™ll apologize for any delays in updating.Â  Our service provider was down due to upgrades and we were unable to upload anything for a few days.Â  As for recent changes, look for half a dozen or more additions to the Crew page and a handful of other minor changes on various pages around the site.

03/18/07Â Â Â Â Â Â  Posting to an online forum, Outlander co-writer and Executive Produce Dirk Blackman recently attempted to clear up a few issues regarding the film, and to try and quell any fears.Â  For those of you who are just catching up now, various press releases have stated the date of the move to be anywhere from 509 A.D. to 900 A.D.Â  This was compounded by the news that one of the buildings in the Norse village was a Christian church â€“ something a little out of place for the 509 Date.Â  Hereâ€™s what Mr. Blackman had to say about the issue:

Â Â Â Â Â Â Â Â  It is in fact a church, whose priest is fighting a very lonely battle to convert his Viking flock. He is not having an easy time of it and has failed to have a recent Viking burial be a Christian ceremony. As for anachronism, we may have cut it a little close, but all we are asking the audience to accept is the possibility that a Christian missionary made it to Scandinavia in the early 8th century (And didn't get his ass handed to him)â€¦Â  [The film takes place in] 709 AD.Â  It was originally 509 AD, which I think is closer to the posited date of some of the historical nuggets in the poem, but a little too far for the Christian component of the script.

Mr. Blackman also had the following to say about the writing process:

Â Â Â Â Â Â Â Â  I co-wrote [with] Howard ten years ago, as 'the truth behind Beowulf, or - if you like - the sci-fi origin of Beowulf.Â  We changed the names as, sadly, they don't mean that much to people these days.Â  I'm also an [executive producer] on the film, so was on-set during filming and was re-writing certain scenes during production.

Â Â Â Â Â Â Â Â  We played the Vikings straight, tough and human.Â  And from the very first time, ten years ago, when we set down to write the script, the first law was "No horns" - I kid you not.Â  Without question, we made mistakes, but not through contempt or laziness.Â  We tried to create a Viking world that was true in feeling but with certain liberties needed because it is after all a movie.

Â Â Â Â Â Â Â Â  We play it completely straight, without a hint of camp. As for the alien technology, it plays an extremely small part - we wanted our hero to have to fight the beast cleverly, not just hand light sabers to Vikings, which would have looked absurd.

03/15/07Â Â Â Â Â Â  We previously reported on the work that the Schmitthenner Armory did for the production of Outlander.Â  Previously, they kindly gave us some pictures of the leather armor they made for the film, and recently let us know about a few more we might be interested in.Â  Weâ€™ve added them to the corresponding gallery along with their brief description of what the pieces are.Â  Itâ€™s really great to see the kind hard work and detail that went into these pieces to give Outlander that special feel, even if half of the stuff is only visible but for a glance.Â

Notice that they also sell some replica pieces.Â  So for a price you can get all decked out as a Viking warrior for the premiere, should you be so inclined. 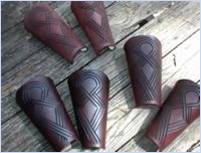 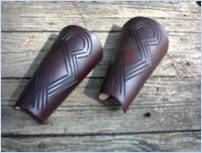 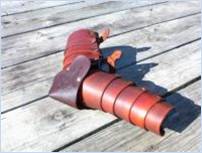 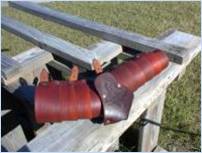 03/10/07Â Â Â Â Â Â  Warren sent us another set of photos last night.Â  Along a couple we had seen before, he sent us a half dozen new pictures from the Newfoundland shoot.Â  Once again ourÂ  thanks goes to him for these photos that can be found in our Newfoundland extras and on-set galleries.Â Â

In other site related news, weâ€™ve adjusted most of the picture galleries.Â  You wonâ€™t notice anything really different visually, but hopefully the thumbnails should load a lot faster. 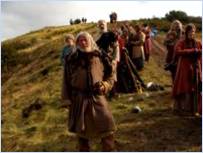 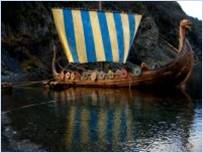 03/08/07Â Â Â Â Â Â  Warren, who we donâ€™t really know much about, sent along some neat pictures from Outlanderâ€™s Newfoundland shoot.Â  Our thanks goes to him for the half-dozen new pictures that can be found in our Newfoundland extras gallery.Â Â  Interestingly Gary Kean â€“seen in the third picture weâ€™ve put here in the update â€“ wrote an article about his experiences as an extra on the set in Lark Harbour that first appeared in The Western Star newspaper.Â  You can read it here. 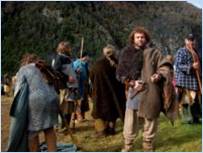 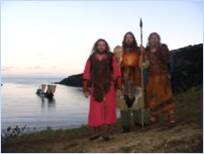 03/07/07Â Â Â Â Â Â  Weâ€™ve done a few more minor additions to the various pages of outlander.solsector.net since you last visited.Â  Weâ€™ve added several new entries to the crew page varying from set designer, to digital compositor.Â  Also weve added a couple of new pictures to the set gallery and one picture to the cast page.

03/04/07Â Â Â Â Â Â  For all of you interested in the glut of Viking movies coming out this year, a recent interview with Karl Urban has shown up on ugo.com.Â  As you may know, Karl Is the star of Pathfinder, a story about a Clash between Vikings and Native Americans around 1000A.D.Â Â  The highly stylized movie comes to theaters in april.Â

As you may remember, Karl Urban was listed until very shortly before production started on Outlander as being attached to play the role of Kainan.Â  So what happened to make Karl drop the role, which allowed Jim Caviezel to step in in his place?Â  Hereâ€™s what Karl had to say:

Â Â Â Â Â Â Â Â  KARL: What happened was, before Pathfinder was made I was in negotiations to do Outlander and for whatever reason they stalled the development of that film, so I went around looking for another project. It was just a pure coincidence that the project I found also had Viking elements in it and I think that Pathfinder is more of an Indian orientated film where the Vikings are an element in it. Outlander is 100% a Viking film, and a Viking - alien film. Obviously, I couldn't do two Viking pictures. I think we all agree that after doing one Viking picture, the next film that you do should not be another Viking picture. 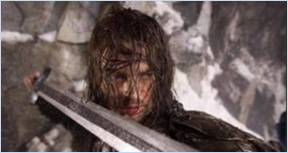 03/02/07Â Â Â Â Â Â  On Monday, CBC radio one in Atlantic Canada will be airing an interview with J. William Grantham on their Mainstreet program.Â  According to Jeff, he will be talking about Outlander briefly among other things.Â  As you may know, he had a significant role as a drunk extra and even scored some time as a photo-double for Kainan (Jim Caviezel).Â Â  So if you are interested in hearing what he has to say you should be able to tune in online here.Â  Weâ€™ll most likely still be at work over on the west coast so if someone records it and sends it to us â€“ and it has enough about Outlander - we might put it up here after.Â  But before then you can try and catch the interview Monday some time between 4 and 6 P.M. Atlantic time.Â  Alternately, we could set our PC to start recording when we leave and just hope it gets enough of it before our harddrive starts to cry.