My career as a VikingÂ Â

LITTLE PORT If someone had told me a month ago that I would be in a major motion picture, I would have laughed my head off.

But once I saw a press release from Theatre Newfoundland Labrador, stating the search was on for long-haired, bearded and fair-skinned men to act as background performers for the Viking epic Outlander, I immediately knew they were looking for people who looked like me.

I sent off my photos and other information and waited to hear back. Sure enough, I got a call.

I had no idea what to expect â€” especially after having to get on a bus at 2:15 a.m. on Day 1 â€” but the first thing I learned was my fellow backgrounders came from all walks of life. There were aspiring actors, movie buffs with regular day jobs, retired teachers, even a mechanic and a fisherman.

We all got to know each other quite well on Day 1, which eventually became known as Black Tuesday after about 100 of us spent 12 hours in the cold wind and driving rain standing in a bog, looking out to sea.

Some people didnâ€™t want to be in a movie that badly and never returned the following day.

Many were surprised to see me return.

Thatâ€™s because I had worn the second-worst costume available for Black Tuesdayâ€™s weather conditions â€” basically a bear skin vest, fur-lined wristbands and cloth boots. Letâ€™s just say fake tattoos â€” not even a half dozen of them â€” keep you very warm. Luckily, I was able to keep my winter jacket handy most of Day 1 and hide it either behind a tree, rock or prop while the cameras were rolling.

On Day 2, I walked into wardrobe holding out for more fur. I was given a long-sleeved tunic, which I was able to wear over several layers of warm clothing. The weather would turn out to be more agreeable the rest of the week, though it never did get above 6 or 7 C.

I had been told I would be a pallbearer â€” as opposed to mere villagers or warriors like most everyone else.

After a second day of standing in the now-infamous soggy bog for hours on end, and having seen how quickly plans for filming can be changed at the directorâ€™s whim, I wondered if I would ever get to lug some dead Vikings off to Valhalla.

Finally, on Day 3, a handful of us were finally chosen to lower a supposedly dead actor (Iâ€™m not going to reveal who that actor was for all you readers who donâ€™t like to know how the plot unfolds) onto the Viking ship built for the movie. Lifting a 185-pound actor about 20 times until the director got his shot was almost as tough as standing in the infamous bog.

When Day 3 concluded, the director said it was a wrap for Newfoundland. Everyone clapped and cheered â€” some out of satisfaction for a job well done and some out of sheer jubilation to finally get clear of that miserable bog.

However, I was not done. Nor were another 20 extras who were asked to come back for a fourth day of filming. On the final day, I got to be in another close-up shot, which director Howard McCain told me afterwards would likely be included in the final version of the movie.

So, despite the inauspicious start and the long days, sticking it out and seeing this job through may have been worth it â€” even if my mug doesnâ€™t appear and you have to pause the DVD and zoom in to find me somewhere in the back of the bog.

See you on the silver screen ...hopefully. 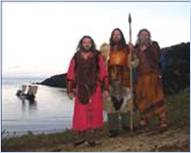 and Gary Sexton of St. Johnâ€™s during filming of Outlander near Lark Harbour in the Bay of Islands.