LARK HARBOUR This Bay of Islands town is a place where Vikings and aliens can meet — with the help of a film crew.

Don Carmody, the Los Angeles-based executive producer of the science-fiction film Outlander, said the location was ideal for the big-budget movie.

“It’s a very scenic location and it works very well for us,” said Carmody. “We have this inlet that simulates part of a fjord. We have these spectacular cliffs and mountains with good access for getting equipment up. We have this very convenient dock that allows us to work off of it, yet shoot what we need and avoid it, so it’s quite a unique location in that regard...

“We were quite knocked out by it.”

He said finding the location was a matter of having a thorough production designer who found a website with photos of the west coast, including Gros Morne, after checking out and discarding New Zealand and B.C.

Carmody wishes the location was easier to get to, especially with a lot of people in tow. The company had to charter a Boeing 737 in order to get the crew they needed into Deer Lake because there weren’t enough seats on regular flights. He also said having the larger centre of Corner Brook nearby is a godsend with good hotels and restaurants.

He said he didn’t need the sound stage at the Pepsi Studio, but it’s a good thing to keep in mind.

Carmody said the people here have been terrific.

“The local people here have been terrifically accommodating and haven’t allowed us to make a nuisance of ourselves and been very welcoming. They’ve been great in coming out and being extras with great faces. The local crew that have supplanted the people from Nova Scotia, Toronto and Los Angeles crew have been Class-A and definitely right up there with some of the best. I’m very pleased with our experience so far.”

He said having films like this on the west coast could be the start of a larger film presence.

“Toronto and Vancouver have huge film industries, but they started small,” Carmody said. “First the American shows came in and they brought a lot of people. The next time they came in they brought less and less. Now, when they come in they almost bring nobody.

“It’s the same thing with Newfoundland. The more feature film work they can get here and build up the skills with different picture and pretty soon it’ll be a self-sustaining industry.”

The production company put out a call through Theatre Newfoundland Labrador to get the burliest, bearded, long-haired men it could find to tackle the role of background actors playing Viking villagers.

Jason Motty, from St. John’s, had a whirlwind trip to make to Lark Harbour in time, getting to the bus five minutes before it pulled out from Corner Brook, where most of the crew is staying.

He said it was a long way to go, but it was well worth the trip and finding out about the role was a lucky break.

“I heard about it in passing,” said Motty. “I started searching the Internet and found out more about it. I sent in my picture and way to go.

“It sounded like fun and it’s been the experience of a lifetime.”

Despite some long waits in cold weather wearing a thin costume, he said it’s been a blast.

“We were 14 hours stood up on the bog, looking at the wind,’ said Motty. “It was so cold. A make up artist came up to me and said, ‘you’ve got that nice, purple look’. I never even had makeup on.”

Sheldon Parsons, of Corner Brook, said he wouldn’t have missed the opportunity for the world.

“It’s been good,” said Parsons. “We had a couple of days with really vicious wind, but you tolerate that.

“It’s really interesting being on the inside, seeing all the setups. It’s really cool. I’d like to see more of this in the area.” 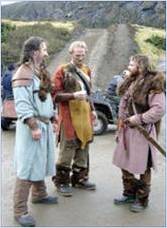