The bright lights of Hollywood are shining in Upper Nine Mile River - literally.  For close to a month, a large dome of light, seen high above the tree line by motorists traveling through or near the East Hants community, has drawn some curiosity.  And while the lights do draw the attention of interested onlookers, it’s what’s beneath those lights that’s truly amazing - dozens of movie cameras, hundreds of vikings and one angry monster.

Since Oct. 16, film crews and actors have been using the property, located at the end of the MacIntosh Road, as their primary shooting location for the big-budget film Outlander.  Several huts and barns have been designed and constructed in a large field to resemble a living Norse village, while in another field, which looks down upon the smoke filled movie set, dozens of tractor trailers and campers are parked as people run around in different directions handling their assigned responsibilities.

Outlander stars Jim Caviezel (The Passion of the Christ), Sophia Myles, (Underworld: Evolution), Jack Huston (Factory Girl), Ron Perlman (Hellboy), and John Hurt (Harry Potter and the Sorcerer’s Stone).  The epic journey begins when a space craft crashes into the majestic fjords of ancient Norway and into the time of the Vikings. From the wreckage emerge two bitter enemies: a soldier from another world – Kainan, played by Caviezel– and a bloodthirsty creature known as the Moorwen with man and monster both seeking revenge for violence committed against them.  As the Moorwen ravages the Viking world, killing everything in its path, Kainan forms an unlikely alliance with the primitive but fierce warriors.  Combining his advanced technology with ancient Iron Age weapons, the hero leads a desperate attempt to kill the monster - before it destroys them all.

Carmody said the film is an example of Vikings meeting Predator.  “It’s thrilling, something like the way Predator was,” Carmody said.  “I think a lot of people will be taken by surprise. It looks as though the movie is going one way and then all of a sudden, you realize it’s not going in the direction you had first thought.”

The movie is currently in the middle of a three week period where much of the filming will be at night.  While some of the film has been shot in other Atlantic Canadian locations such as Newfoundland, Carmody says there were several reasons why the Upper Nine Mile River location was selected.  “This was actually the first location we looked at in Nova Scotia,” he said.  “We actually went all over looking for other locations but ended up back here. This spot is a natural valley, it’s surrounded by trees and has water nearby. The clean tree line will allow us to add some mountains in the background.”

With so much involved in the set design, work actually began in August.  Filming for Outlander also took place in Kinsac Lake and Oakfield Park.  “We’re a little more than half way through filming,” continued Carmody. “We hope to have most of the filming in this location wrapped up by the end of the month.”

Calls for extras in the movie were also put out and while he couldn’t be sure, Carmody estimated approximately 2,000 were involved from Halifax and the surrounding areas.

The film is helmed by Howard McCain from a screenplay he wrote with Dirk Blackman, and is produced by Ascendant Pictures/VIP Medienfronds 4 in association with Rising Star.  Filming continues through January 2007. 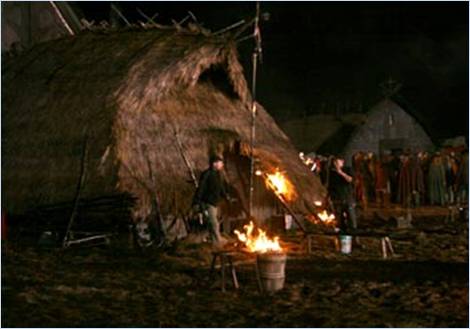 fire as crews ready themselves for an upcoming shot.