Bright lights for Bright and Lion

Gary Hiltz certainly knows the meaning of having the last laugh.

The New Ross beef cattle farmer has taken his fair share of ribbing from friends and competitors along the ox pull circuit for his four-year-old pair, Bright and Lion.

The duo are one solid colour and much lighter than most oxen. Mr. Hiltz always favoured his caramel-coloured breed and now it appears Hollywood does too.

Mr. Hiltz recently returned from a stint in the major motion picture industry when he and his oxen were chosen to play a part in a science fiction movie being filmed in Nine Mile River.

Directed by Howard McCain, and starring “Passion of the Christ’s” James Caviezel, “Outlander” centres on a futuristic spacecraft that crashes into a year during the time of the Vikings. Mr. Caviezel has been reported to have said the big-budget flick is a “light combination of ‘Braveheart’ and ‘Highlander.’”

When it’s all said and done, this sci-fi picture is slated to be an out-of-this-world epic, but for one New Ross cattleman, it’s already been the adventure of a lifetime.

“I went to a lot of exhibitions with these oxen, but I never had as much fun as I had with them there,” he said from his home along Lake Ramsey.

Mr. Hiltz has been breeding, raising and working oxen since boyhood. He comes from a long line of farmers and one of his favourite childhood memories is riding around on the yoke of his father’s oxen team. He has made his living from the big breed and now he’s made the big screen.

The team spent five weeks on the film set as they were being used for background scenes through the Viking village. Mr. Hiltz joined them for five days and became well-known around the set.

“They called him the ox man,” says his wife, Anna, who joined him on location.

Mr. Hiltz says he didn’t mind all the costumes and makeup, which usually took about an hour to get off and on each day.

There were other animals, such as horses, goats and hens, on the film set. When Mr. Hiltz wasn’t there, his oxen were minded by a crew member whose only job was to care for the animals. Mr. Hiltz says he never worried about his team because everyone was so good to them.

Although this is the first movie Mr. Hiltz has been a part of, he’s hoping it won’t be his last. The oxen were very well behaved and didn’t seem to mind the experience. Other animals were taken off set because they couldn’t handle all the noise and distractions, but Mr. Hiltz says his team did everything he asked of them.

The pair were so well-behaved that a professional horse trainer for the film industry asked Mr. Hiltz for his training secrets. Mr. Hiltz says it’s nothing but time.

“I walked them a lot,” he says of raising this pair.

Mr. Hiltz and his team are home and back to business, but he says he’ll never forget his little glimpse into Hollywood. Not much of a moviegoer before, Mr. Hiltz is sure to be first in line when “Outlander” hits the big screen in 2007. 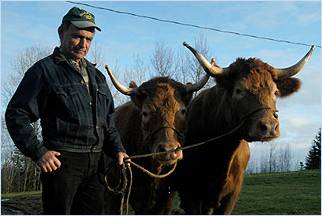