Actor Patrick Stevenson says walking onto the set of his latest movie is like walking back in time.

But Stephenson, who counts Fredericton as his hometown, said he'd never trade places with the Vikings portrayed in the film.

"It wasn't an easy lifestyle. Everything was hand-made or pillaged. I guess I'm a little used to the modern conveniences."

He will share the screen with Passion of the Christ star Jim Caviezel and veteran actor John Hurt when The Outlander is released in 2007.

Caviezel stars as Kainan, a traveller from another world who is marooned on Earth after a spaceship crashes into the majestic fjords of Norway. He joins forces with a group of Vikings to kill a bloodthirsty creature that escaped the wreckage.

Stevenson, a 1985 graduate of Fredericton High School, is home for Christmas for a few days before returning to Nova Scotia to wrap up filming.

The producers built a functioning Viking community on their set north of Halifax.

"They built this entire Viking village with the longhouses and the shield hall. It's just amazing."

"He's very much into the pagan gods of the time. So, I learned about the pagan gods, studied Thor and the runes and everything that would influence him in particular."

Stevenson said the best part of this job has been working with veteran film actor John Hurt who starred in The Elephant Man.

"He was very giving as an actor - just a gentleman through and through."

However, there were drawbacks to filming scenes in Newfoundland and Nova Scotia.

"The hardest part was probably the cold weather." 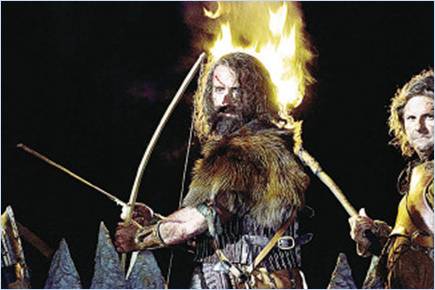 ALL IN A DAY'S WORK: Patrick Stevenson is enjoying his role in the movie

Outlander, which is being shot near Halifax