11/24/07       To try and help you find some of the information you want quicker we’ve started an F.A.Q. for the movie.  We’ve tried to answer some of the basic questions as succinctly as possible, so for more detailed answers you will still want to visit the other sections of our site.  Lets us know what you think by clicking the report link in the menu bar above.  If you have any questions that you feel should be on the page, please let us know and we’ll try to answer them as best we can. 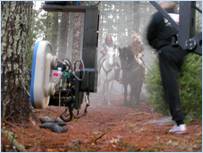 11/18/07       Some interesting tidbits surfaced recently in a document on the Director’s Guild of Canada’s Ontario chapter’s website.  Asside from a few names that we’ve added to the crew page, it provides the name of the post production company that’s provided the facilities to handle much of the audio editing for Outlander:  Tattersall Sound and picture.  You can check out their website here though as of right now there isn’t a lot of information available as they are in the middle of a website redesign.  You can download the DGC document here.  The Outlander entry is on page five.

11/12/07       Once again, we’ve updated the crew page to include a number of new entries.  One of the latest additions includes  Bobby Tahouri who receives an “additional music” credit along side Geoff Zanneli as the main composer.  Mr. Tahouri as worked alongside Geoff Zanneli on a number of his other projects including Into the West and the third Pirates of the Caribbean movie.

Apparently the IMDB is saying that Outlander is slated for a March 27th, 2008 theatrical release date in Russia.  It would be hard to imagine the movie playing there before the North American market but anything is possible, we suppose, though it does coincide with the possible February/ March release reported by Jim Caviezel.    Oultander – to the best of our knowledge – is being distributed in Russia by Central Partnership.    We think a North American date is probably just around the corner!

11/01/07       Jim Dorey, whom we’ve mentioned before, has posted another Outlander entry on his movie blog.    Jim usually blogs about the upcoming trend of 3D cinema, but, because he was also a background performer in Outlander, he has from time-to-time also posted about various experiences he had on set.   This latest entry proves that invariably someone will get burned if you play with fire… literally!

We were there to learn and have some fun - after all we are Vikings running around screaming and hacking our blades down on nearby victims all night long! Some trouble was brewing from the get-go.

You  can read the rest of the humorous entry here. 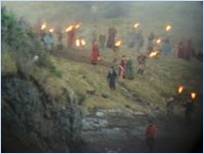